Are you counting down days until coming in marina and boarding on the sailing yacht? Ready for new adventures? We are! Why wouldn’t you plan your route according to traditional events that take place and definitely should be visited?
Home > Blog > Adriatic Festivities

We’re bringing you Adriatic festival reviews that are worth of seeing. Croatia is rich with festivals and it’s almost impossible not to come across one during your summer break. Whether cultural or musical festival, you’ll definitely have the time of your life. There are few cultural festivals with long tradition on our list. We’ll take you back to history so you could visit some old Croatian places on islands and coast. Get ready for good food, vine and a vacation to remember! 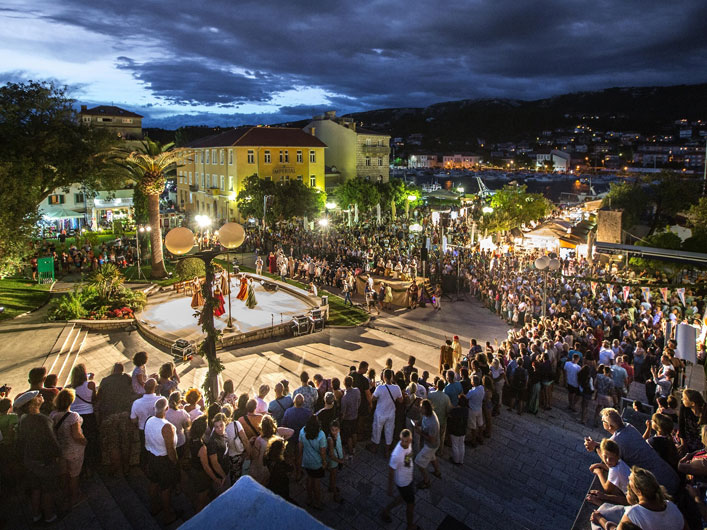 Fjera on the island Rab

The island of Rab is famous for its first and the biggest summer festival in Croatia that lasts for 3 days, 25th, 26th, and 27th of July. The first Fjera was held on the July 21st in 1364, when the city of Rab decided to honor it to Louis I. The Great who freed the city of Venice power. During this festival, the whole city turns into the Middle Ages. Knights walk along the streets and both workshops and craft shops are coming back to streets. At the end of July in Rab you can see old crafts like the way of making straps or decorating hair with flowers, and your child will find toys that are hand-made with traditional tools. You’ll hear music on every corner, you will enjoy traditional food and you won’t miss entertainment either. There are some specific dishes: prosciutto, cheese, olives, fish and a well-known Rab’s cake. Make sure you have a glass of fine wine from Rab.

Dugi otok is not only famous for its sandy beach Saharun or Sakarun, but is also known for its amazing summer festivals. The 3-day festival Saljske užance has been held each year in August, in Sali, usually weekend before Velika Gospa (Assumption of Mary). This fun cultural manifestation takes place for more than half of century. It all begins with Ribarska noć (Fisherman's night) and a show under the name of ''Tovareća mužika'' (traditional long island's music), but also with the real gourmet feast: cooking and choosing the best fish stew also known as 'brudet', grilling tuna fish, sardines and other seafood. There are different competitions and sport games the second day and in the night you can enjoy some music and traditional meals on the shore. 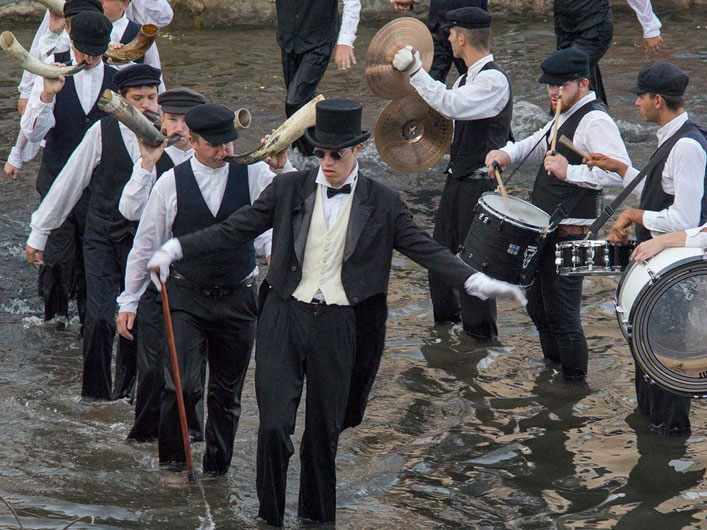 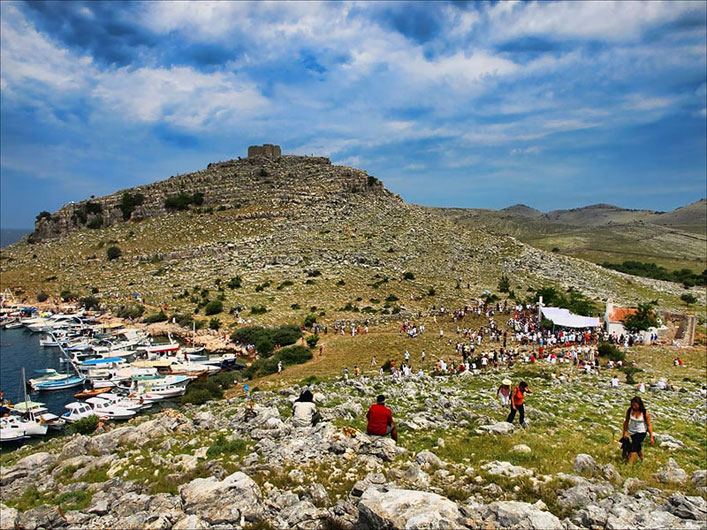 A small church, Gospe od Pohođenja, that was built in the 17th century, has been situated in one bay on the island of Kornat. It is interesting that during the medieval period, the island of Kornat has been named as: Insulae Sanctae Mariae, the island of Stomorin (which is actually the real name of this church nowdays). During the traditional festivity of Gospe od Pohođenja, or how the locals call it Gospa od Tarca (first Sunday in July), the boat procession to the island of Kornat is being held. It all starts from Murter and when the boats approach to the bay, it all continues with mass and blessings of fields, sea and boats. This procession is one of the most beautiful religious events in Croatia.

Moreška is famous dancing and acting manifestation that takes place on the island of Korčula, from the 17th century. It is a dance with swords followed by dramaturgical scenes. In each part there are 4 characters (the black king, the red king, the father of the black king and one female character – princess Bula). She is the only unarmed character around for who, black and white armies fight or actually dance for her affection. Each army has 12 ‘moreškants’ (participants of Moreška) and people from Korčula feel so honored to be a part of this event. Moreška takes place during festivities and more important events, but also during tourist season or due to pure interest towards the festival. During July and August in the town of Korčula you can buy your ticket and watch Moreška usually on Mondays and Thursdays. 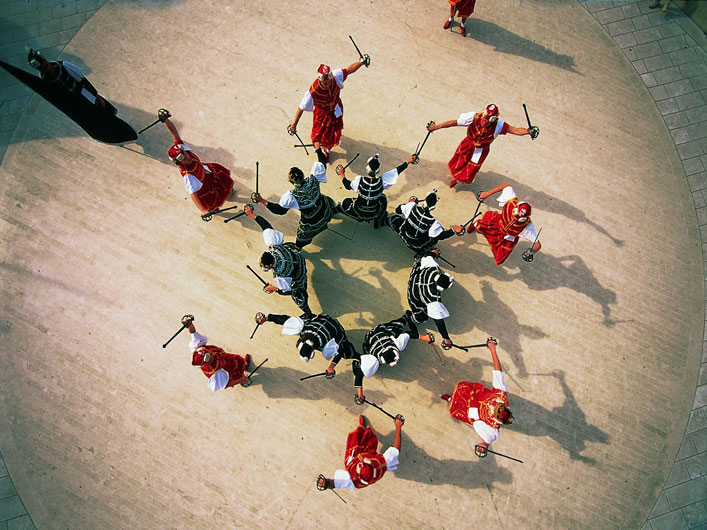 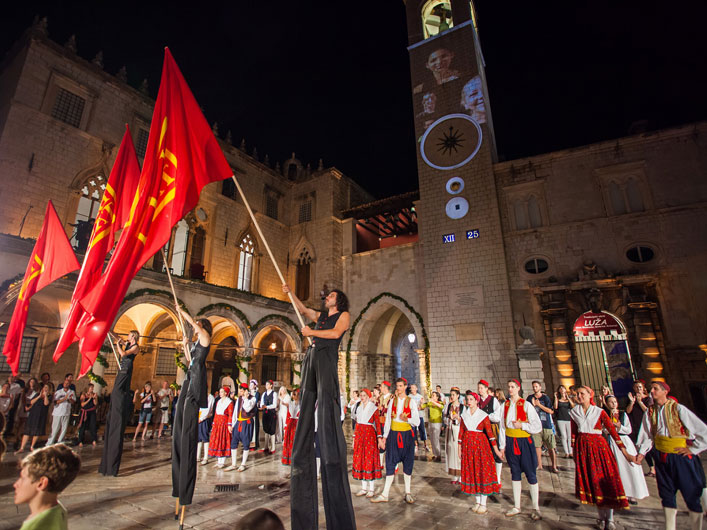 This summer festival was founded in 1950s, and takes place in Dubrovnik on numerous different city locations. It combines music, drama and dance shows that are being prepared throughout the whole year. This festival is one of the most prestige ones in Croatia. It shows Croatian culture through the history, but also, at the same time it approaches to the European one as you can see some of the greatest European and world names acting here. In case you sail along Southern Adriatic, have a look and listen to some part of this beautiful summer festival that lasts for more than a month during the summer season.

The last but not the least, we introduce you ‘Sinjska alka’. Even though it is not on the seaside part of Croatia and so is not approachable by boat, Sinj is really close, just cca 20 minutes ride from Split, so you can arrange your visit at any time. The closest marina is also in Split, but to get to Sinj you’ll need a car or bus. This event is UNESCO protected. Alka is a knight game that takes place in August and celebrates the victory over Turkish conquerors in the 18th century. In this competition usually 11-17 alkars can compete. Alkar is horseman who tries to hit the little iron circle with a spear in the run. That circle is on the heights of 3,32 m and alkar has to hit it in the time of 12 seconds on the field long 160 m. Have a peek in the past, you won’t regret! 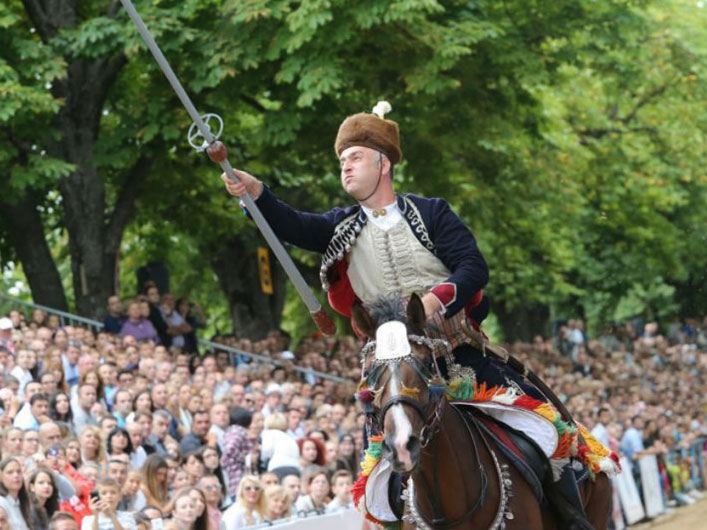 Of course, these are just the most popular ones from the numerous summer festivities and activities along the Croatian coast. No matter if you are in Croatia for the first time, or you’ve already been here, we believe you’ll find something on this list you haven’t seen yet. You will definitely include at least one of the mentioned events on your list, because Croatia is not only beautiful crystal sea and sun, it’s also rich cultural and entertaining center. Make your vacation different and have a look at real Dalmatian traditions and values.